React vs Angular: Which One Should You Choose for App Development? 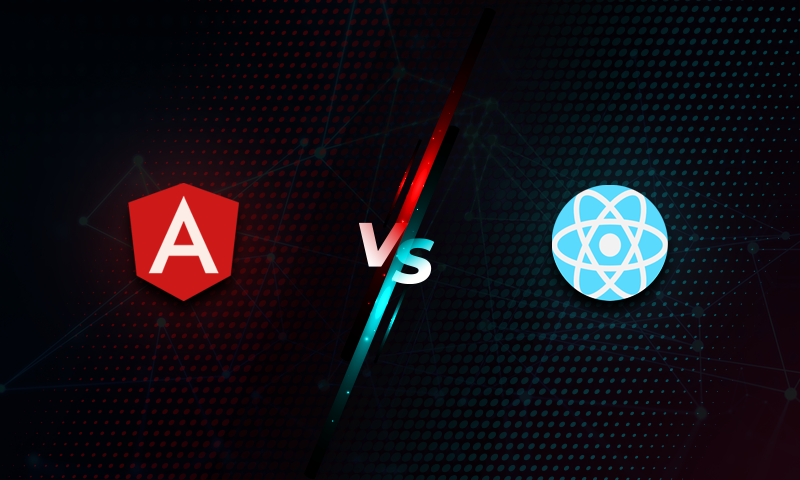 There are so many JavaScript frameworks available in the market. Some are working for server-side rendering, and some are working for client-side rendering. Some frameworks have exponential advantages and some lack few features. However, finding the right framework that fulfills your requirements is not an easy task. Employing a framework that could not match your needs will ruin your investments and project.

Furthermore, Angular js vs react js is the biggest competition. It gets tough for the developers of JavaScript when they have to choose one of them. Both frameworks are popular in the app development world and both offer some serious features. Angular and React are the most versatile frameworks in the JavaScript Ecosystem. Both of the stacks are Front-end development frameworks. However, the challenge remains the same either to choose Angular or Reactjs.

In this article, we will do a side-by-side comparison of Angular and React including all technical components, advantages, and disadvantages.

A framework offers a complete set of libraries and ready-made solutions for software programming, frameworks are flexible and easily customizable to boost app development. A framework contains a principle of inversion of control (IoC) and coding for a particular purpose. Some frameworks offer reusable codes that transform custom code of programming language into libraries.

The framework contributes a big share in software development, delivering high-level functionality that helps app developers to concentrate on developing the project in a unique way. A well-designed and high-quality cross-platform framework improves the speed of app development, simplifies automation, and increases software reliability. As a result, it saves time and money.

Angular is a versatile framework developed by Google. This framework builds dynamic mobile and web apps. The best features of Angularjs are dependency injection, two-way data binding, and obviously, this framework is supported by the biggest tech company. Angular mobile development is especially known for building large-scale apps. Famous brands such as Forbes, Xbox, BMW, and many more have employed Angluarjs for their front-end app development.

The current version of Angularjs is Angular 12. This updated version of Angular offers robust support to develop libraries along with new engines. Angular version 12 enables app developers to choose HTML as a template language. This approach will help the syntax of HTML to express the elements of mobile applications clearly and briefly.

Apart from this, there are a few more updates that we will experience in the current version, for example, transferring from i18, style improvements, Nullish Coalescing, and many more. Furthermore, Angular version 12 offers an improved feature of bug fixes. The current version of Angular also offers a language service, core, router, and compiler.

Angular supports caches and other processes, which decrease the load from CPUs and servers. As a result, the performance of the server is enhanced, and it decreases the error ratio. However, Angular only delivers static files to the API.

With the help of Angular, mobile application prototyping became faster. In less time and significantly less coding, an app developer can build app prototypes with excellent functionality, get reviews, and can make changes in the design without getting irritated.

Among all UI frameworks, Reactjs is quite faster comparatively and it also offers flexibility to integrate endless third-party plugins and other frameworks. React provides a preview of a mobile app during the development, so the developer gets the look and feel of the app and overall user experience. Moreover, React builds web applications, native-rendered apps, and mobile applications with beautiful UI.

Reactjs enable app developers to build reusable UI codes with the help of a declarative mechanism as a result, it will reduce the efforts of developers in developing UI. The biggest feature of Reactjs is that the developer can divide the application into various reusable components.

Reactjs offers interactivity to the layout of any UI. Additionally, app development with Reactjs becomes fast and is high quality. As a result, both developers and clients can save their time respectively.

The modification of data becomes easy with the help of Reactjs. Reactjs automatically changes any part, if user-interface if required. While using the progressive functionality of Reactjs, a developer does not need to employ any extra stack to perform any update in UI.

Since Angular and React both are common cross-platform frameworks in the app development world. For an app developer, choosing between angular or Reactjs for mobile app development is a complicated question. In this article, we analyze the skill and functions of both frameworks from all aspects.

Features of Reactjs for Mobile Apps

- Reactjs offers reusable codes along with their logic and control.

- The application gets more efficient and user-friendly with the help of Reactjs unidirectional binding.

- Using Reactjs, the app developer can write code of JavaScript and HTML in a single file by using HTML-like syntax.

- Reactjs is an open-source, cross-platform framework with efficient performance.

For UI designing Reactjs is the best option a developer can ever get. In some cases, Reactjs requires additional libraries to process the app development. The processes of interaction, routing, and state management with the API Reactjs require Helmet, react-router, or Redux. However, having exponential features like component-based routing, project generation, dependency injection, or dependency injection, Reactjs still requires an additional set of libraries and modules.

The best part of Angularjs it doesn’t require any additional set of libraries. Angular is a full-fledged framework for app development and other relatable projects. Functions like project generation, form validation, dependency injection, and data binding can be applied with the stock Angularjs.

React is one of the most famous frameworks of JavaScript. So, the community development and support are also massive in Reactjs. The community is always ready to move forward with the latest stacks as fast as possible, keeping up with the community and bringing constant improvements is significant. Companies like Twitter, PayPal, Facebook, Walmart, Microsoft, and Netflix use Reactjs actively.

Angular is less popular than React. Angularjs faces a lot of skepticism, this happened due to Angular 1.0 almost failing right after development. Most of the developers do not recommend this framework because angular is very complicated, and it takes a lot of time to understand the presets of Angularjs.

Mobile apps of AT&T, Apple, Adobe, McDonald’s, and HBO are built from Angularjs.

React framework develops both mobile and web apps. However, Reactjs is required to be with Cordova for mobile app development. Reactjs can build single-page and multiple-page web applications.

Similar to Reactjs, the Angular framework is the best option to develop mobile and web applications. App developers recommend Angular for single-page and multiple-page web development.

After the invention of virtual DOM, the performance of Reactjs improved. Every Virtual DOM preset is built on servers and is lightweight. This decreases the load on the browser. Moreover, the process of data-binding is unidirectional. Contrary to Angular, Reactjs bindings do not assign watchers which makes the process smooth and reduces the workload. However, the size of the Reactjs application is heavier than the Angular app.

Angular behaves worse in developing dynamic and complex web applications. The bidirectional data-binding manipulates the performance of Angular and makes the development process even worse. To monitor changes each binding is assigned a watcher, and developers run the loop to check the values of watchers. This approach results in additional bindings as well as additional watchers, which makes the entire process lengthy. However, Google launched an improved version of Angular.

Angularjs vs Reactjs has become a complicated discussion. Even though both of the frameworks are seamless, both also lack some features. Angular and React both are dominant and adaptable. While neither of them is perfect, choosing between Angular and React will depend on user requirements and app niche.