The Ultimate Guide to Cross-platform App Development Frameworks in 2022 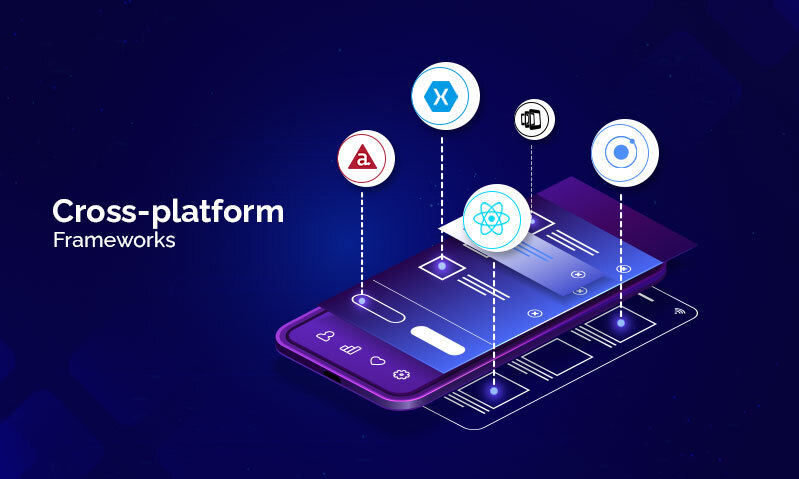 The mobile app development market has become so massive, and this technology is optimizing every business in the world. Today, startups or enterprises do not miss any chance to miss their app’s presence on the most famous and used platforms: Apple app store and Google play store.

The mobile app enhances the capabilities of any business. Mobile apps give leverage to businesses to reach those places where they cannot reach physically. The reason enterprises move to mobile app development is that it is the most used technology in the world. According to a survey, normal users on average spend almost four hours a day using mobile applications. The reason behind continuous growth in the mobile application market is the increasing demand for devices, rise in the e-commerce industry, and Internet of Things technology. There are millions of applications available on multiple platforms. The number of downloaded mobile applications from iOS and Android will surpass 30.8 billion.

Let’s talk about how to make cross-platform apps and which technologies stacks are required to build an app that runs seamlessly across all platforms.

How to Make Cross-platform Apps

Every platform has separate guidelines, so developers also need to consider the guideline of UI before starting the development. To render the experience of using, you need to address the requirements of various platforms in cross-platform mobile app development.

An experienced app developer knows all the guidelines and requirements for mobile multi-platform development. A developer understands, how to use the cross-platform mobile app framework to develop an app that is handy for all platforms.

There are different advantages of using modules to handle cross-platform app development. This approach saves time in app development on multiple platforms. Apart from this, it empowers the native SDKs. With the help of modules, you can transfer the most useful information in the process.

• Most developers use one API to deliver mobile applications of any particular operating system, for example, Google Android, Apple iOS, and web apps.

• This direct approach might be compatible with mid-level projects or for projects where clients have the same requirements.

• Another thing that is also necessary for app developers is to modify the service or API to any particular needs of the platform. To operate this process, a developer must need to separate one API from the existing service of API.

Separation is not only a single problem in cross-platform app development. Devices of the same platforms also have opposite capabilities. The most basic and obvious is the size of the screen, but the specs of other devices can make applications behave differently.

In the last step, you will finally test and launch your cross-platform mobile application.

Before publishing the app on any platform, you have to clear the requirements for approval. The process starts from the testing, and it is a very critical method to make sure that the app needs to publish or not.

The app testing carries multiple stages. It starts from the developers unit to a wide range of hardware to top managing beta testing. Most developers use this practice to test different versions of the operating system. This practice is also useful to check the capabilities of any device.

Rather than programming multiple times for different platforms, app developers use cross-platform app development frameworks for the excellent execution of apps within a short period.

Some of the most famous cross-platform development tools are listed below:

The most amazing thing about this cross-platform tool is that it builds the app according to its basic techniques, but the results give the feel of pure native apps. Xamarin uses the interface of a native app that gives the exact experience that a user wants to get.

Developers consider Xamarin as a vital prospect for different development platforms such as app development for web and handheld devices.

Ionic is the most efficient SDK of HTML5 that enables to build apps for a native platform with the help of advanced technology stacks, for example, CSS, HTML, and JavaScript. The primary function of this SDK is to create the look and UI interaction of the mobile app.

To develop hybrid apps, the Ionic mobile application development framework utilizes HTML5. The Hybrid app offers a top-notch experience over native apps when the developer considers speed, third-party access, and support. Therefore, it offers you a better option if you do not have sufficient time.

Flutter is an open-source SDK that enables you to build high-end mobile applications that work seamlessly across all platforms using a single codebase. This framework was developed by Google.

Flutter uses the Dart programming language because it is handy and easily managed by Java or JavaScript developers. This framework also leverages you to build custom mobile applications for both Android and iOS operating systems.

Using this technology, developers have built many successful projects, for example, Alibaba, Google Ads, etc. The most amazing feature of this framework is that it also supports a widget feature that improves the user experience of almost every app.

React Native is a JavaScript library that enables you to build amazing mobile apps. The best feature of React Native is that it allows you to write the modules in different languages, for example, Swift, Java, and C. React Native framework is also used in video editing and image processing that cannot be possible with other frameworks.

Without any doubt, React Native is one of the best cross-platform application development frameworks. The reason behind its insane popularity is it takes your source code and transforms it into the native components in a short time. The most famous social media apps, Facebook and Instagram, are built from React Native. React Native also creates a positive impact on enterprises.

Appcelerator is one of the best cross-platform app development frameworks. It is an open-source framework. Appcelerator permits developers to learn once and write anywhere by reusing the code to create cross-platform applications. This framework is useful for creating applications for different operating systems such as Android, iOS, macOS, tvOS, web, and Windows. Appcelerator utilizes the JavaScript library for developing responsive and dynamic interfaces. Using Appcelerator you get access to Hyperloop. It is one of the best cross platforms that can manage the development of applications for all platforms. Appcelerator offers a native-like look and experience across all platforms as its code is compiled into native code.

There are many open-source cross-platform tools available on the market, and each cross-platform framework offers its benefits. You can avail multiple services using cross-platform app development frameworks such as Data Abstraction Layer (DAL), Interface Layer (SIL), and user interface (UI) designing on any platform. Using the data layer, you can write the same code for all platforms.

How Much Does It Cost to Make a Food Delivery App?